by Bank News
in Microcredit
0 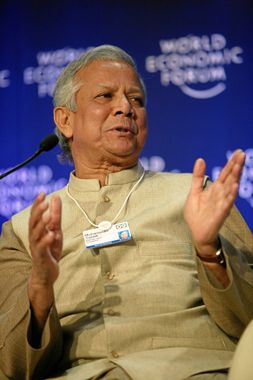 In its modern form, microcredit has supposedly been invented in the South Asian region (Bangladesh) by Muhammad Yunus, who founded the Grameen Bank in 1976. His aim has never been to challenge the economic and social structures at the roots of inequalities. His official aim is to “lift people out of poverty” by making them all entrepreneurs. We argue that his real aim is the same as for any other capitalist company: to make the highest possible profit
Profit
The positive gain yielded from a company’s activity. Net profit is profit after tax. Distributable profit is the part of the net profit which can be distributed to the shareholders.
on the short-term, whatever the consequences of their activity may be. Indeed, Muhammad Yunus’s own wealth is estimated to be at least US$10 million – he may not be a billionaire, but making US$10 million on the back of the poorest while claiming to help them is an impressive feat!

The core idea of microfinance is that traditional banking institutions do not lend to poor people because the risk of non-payment by the debtor is too high. Therefore, the poor are condemned to stay poor. Microfinance specializes in lending relatively small amounts to poor people, arguing that this will allow them to launch their own economic activity, become entrepreneurs and get out of poverty.

This objective is not actually met by microfinance.

However, microfinance soon proved to be a very…

What are emerging spaces? | PitchBook